In Canada, credit unions and caisses populaires are usually governed by the laws of the provinces where they operate.

However, in 2012, the Government of Canada put in place a framework that allowed provincial credit unions and caisses populaires to continue as federal credit unions (FCUs). This enables such cooperative institutions to carry on business across Canada and grow nationally.

Once continued federally, FCUs become members of CDIC. As such, eligible deposits placed with an FCU enjoy CDIC deposit protection.

To support FCUs during the change from provincial coverage of pre-existing deposits to CDIC protection, transitional coverage applies.

How does transitional coverage work?

Provincially insured deposits that existed prior to the change, and which are otherwise eligible for CDIC coverage, are considered “pre-existing deposits”. During the transition period, these pre-existing deposits continue to be covered up to the amount that would have been insured under provincial law.

In certain cases, some financial products that are covered by a province may not be protected by CDIC. Under the federal framework, FCUs are required to inform members of any changes to their deposit insurance coverage prior to the change and throughout the transition period. A written notice regarding the changes must be publicly posted at FCU branches, and made available on their website.

What happens when transitional coverage ends?

Once the transition period for pre-existing deposits has passed, regular CDIC coverage rules will apply.

Federal Credit Unions at a Glance 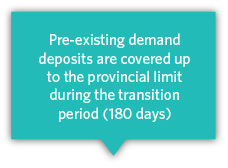 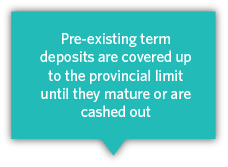 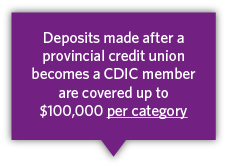 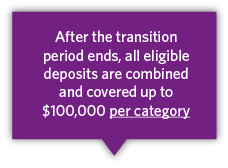